The United States F D A approved new drug to treat Multiple Sclerosis.
Gilenya capsules containing fingolimod as active molecule is approved by US FDA on 22-09-2010 for treatment of Multiple Sclerosis, the drug can be used to reduce relapses and delay disability progression in patients affected with relapsing forms of multiple sclerosis (MS).

Gilenya (fingolimod) is the first oral drug that can delay the progression of disability and lessen the frequency and severity of symptoms of multiple sclerosis (MS) it is an option for at present available injectable therapies.

It is developed due to autoimmune disease condition where body’s own defense mechanism attacks its own body tissues , here in case of Multiple sclerosis mylin sheth that covers nerve fiber becomes target of auto immune attack.

The progress, severity, and specific symptoms of MS are unpredictable and may vary from one person to person. Symptoms may be mild, like numbness in the limbs, or may be as severe as paralysis or loss of vision. 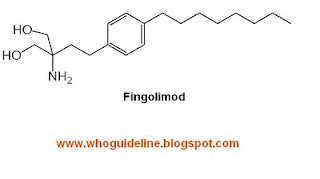 As Gilenya reduces immune response it is likely that there is a risk getting infections.
US FDA also recommend an ophthalmologic evaluation as in some cases serious eye problems (macular edema) are reported in patients taking the drug Gilenya.
Adverse reactions:
Reported in clinical trial in patients taking Gilenya are headache, influenza, diarrhea, back pain, elevation of certain liver enzymes and cough.
The drug will be available as capsules of strength 0.5 milligram.
Gilenya is made by Pharmaceutical Manufacturing Company from Switzerland Novartis, Basel, Switzerland.
Congratulations to Novartis, Basel, Switzerland.

What is Pharmaceutical Equivalents

What is Pharmaceutical Alternatives

What is Therapeutic Equivalents

What is drug receptor , How a drug resistance occurs

What is drug interaction

Drug interaction, and its examples

What is first pass metabolism of a drug

What is a drug interaction

What is an antibody? what is monoclonal and polyclonal antibodies?

Testing of vaccines at different stages of production

Types of validations in pharmaceutical manufacturing

Requirements of documents for validation of sterilisation process

How to investigate OOS out of specification results

Determination of Phenol coefficient of a disinfectant

Aspects of validation of manufacturing process in sterile pharmaceuticals

Abbreviated New Drug Application (ANDA) What is ANDA , detaied information about ANDA preparation and submission to US FDA

How to make Investigational New Drug (IND) Application to US FDA

.@timesofpharma People with symptoms should ask MD about breathing test aka spirometry.